Why Is A Setter So Important In Volleyball? | Cortina Volleyball 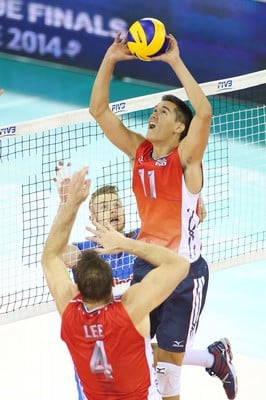 Let me SET the scene for you. Day one of volleyball tryouts, dozens of players warming up and peppering on the court. The coaches gather together, catch up with each other, and watch the players warming up. They go over the list of names and positions on the tryout sheet, one of the first questions that always comes up is "How many setters do we have trying out?". For any new player or coach, it can be easy to get lost in the flashy excitement a dynamic hitter brings to a team. Rightly so, great hitting is very fun to watch, but the most important player on the court flies under the radar. If you barely notice them, then why is a setter so important in volleyball? Here are the reasons why:

1. They Are Involved in Almost Every Play

Similar to a quarterback in football, the ball will go through the setter almost every play on offense. The setter is responsible for getting the second of the three touches, no matter where the pass ends up going, and directing it to a hitter for the third touch. Having a great hitter is only useful if your setter can actually get the ball to him or her to hit.

As said before, a setter is responsible for getting the second of the three touches no matter where the pass goes. If a setter can track down any pass and set it where a hitter can spike effectively, it does not really matter how poor the initial pass was. Being the safety net for a struggling defense is a huge reason why a setter is so important in volleyball.

Consistent setters make the hitters job that much easier. Timing is everything when running offensive sets and having a setter that can deliver a ball at a consistent location with a consistent pace is key for hitters to get into a flow with their technique. When a hitter knows where and when the set will be, no matter where the pass is, all they need to worry about is sending the ball home.

In ideal situations, your setter plays all around in either a 5-1 or a 6-2 scheme. Having your setter(s) out on the court the entire game further establishes the rhythm and consistency needed to run all other parts of the game. It also helps to keep the flow of the match going without needing to disrupt with substitutions or sending cold players in off the bench.

Being such a focal point of the team breeds leadership qualities. A setter that is out on the court constantly running and managing the offense means more responsibility on them. A setter that understands their role and importance to the team, without getting a big head because of it, can help struggling teammates by taking extra accountability for errors and energizing teammates in critical moments.

Of course, all positions have their role and importance to the overall team success. Great setting is nothing without great hitting, and a setter needs defense to pass in order to set. Why a setter is so important to volleyball is because of how involved they are on every play and the leadership qualities they can bring to the other 5 players on the court. Think you have what it takes? Learn how!